Arch rivals India and Pakistan may be in different groups but they are all set to clash against each other in a warm-up T20 at the R Premadasa Stadium in Colombo next Monday.

Arch rivals India and Pakistan may be in different groups but they are all set to clash against each other in a warm-up T20 at the R Premadasa Stadium in Colombo on 17th. The unofficial T20 will be broadcast live on Star Cricket and is the only warm-up match that will be televised for the great interest it creates amongst fans all over the world. 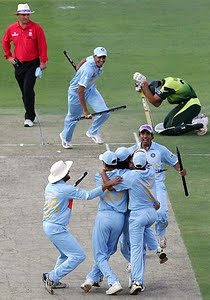 India is placed in Group A along with England and Afghanistan. Pakistan on the other hand is in a tough Group D along with New Zealand and Bangladesh. Barring any real upsets, India and Pakistan will officially engage during the Super Eights rounds.

Pakistan Captain Mohammad Hafeez is pleased to play against India in the warm-ups as it helps them to get used to pressure very early. Here is what Hafeez had to say regarding the warm-up tie against India: